We care about where YOU live. APPLY NOW.

Abbotsford Airport is quickly expanding with new airlines being added and an increased amount of flights coming and going over the past couple years. The record passenger count hit 800,000 last year, up from 500,000 a couple years previous, and it is likely to be over a million this year as the airlines expand and add more flights. A $5 million dollar expansion has also just been announced without an increase in airport fees. This is largely due to West jet’s budget airline, Swoop, is looking to make Abbotsford their third location in Canada to station the airliners craft. 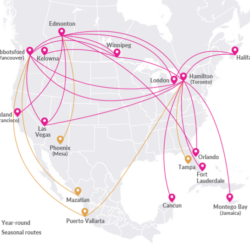 Swoop airlines now flies to Several cities in the the United States including: Las Vegas, Phoenix, Orlando, Tampa Bay, Fort Lauderdale, & more! They also his a couple spots in Mexico and the Carribbean including Puerto Vallarta & Mazatlan direct from Abbotsford or Cancun and Montego Bay on a connect flight though Hamilton.

Check out all of their routes here!